How Parlangi has grown from prototype to reliable platform 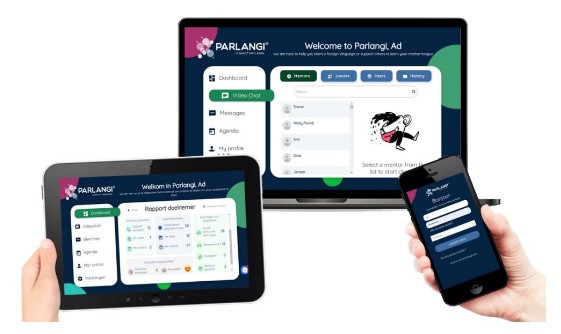 A smart architecture enables flexibility in the further development of the application in a cost-efficient manner.

Coteng was involved in this project from the start. Like many startups, but especially for Parlangi as a cooperative enterprise, the budget was limited at the start. The challenge was to offer seniors a user-friendly platform with video connections. In addition, junior and mentor would be linked via a database based on language and interests. Users had to be able to easily arrange video sessions and schedule them in an online agenda.

At first, a prototype was set up to try the concept with ‘real’ students and seniors, but also to convince investors. In such startup projects it is important to design an architecture that allows the necessary flexibility in the future. This way you can improve your product with the feedback you receive. At the same time, the whole must be continuously scalable as the startup grows (by scaling up over different servers).

In order to keep the development costs low, we worked with existing libraries as much as possible in this project. For Parlangi it is important that they become the owner of the source code that Coteng delivers, but also that they can actively manage it themselves. A limited number of pages are managed by Parlangi volunteers.

With the feedback from the prototype, the current version of the user interface was designed and implemented. The goal was that both the older and younger generation could work smoothly with the platform. This has led to a number of specifically tailored components.

The well-thought-out architecture ensured that gradually more functionalities could be added as the experience and budget grew. In this way, the platform could be further expanded to be used for other target groups as well. Recently, both the VDAB and various municipalities have started using the Parlangi platform for their integration and language programs. For this purpose, a dashboard module has been added that allows a coordinator to monitor the progress of the participants in the process.

Because not all seniors have access to a computer and students nowadays prefer to work mobile on their phone or tablet, there is now also an iOS and Android version of the application available.